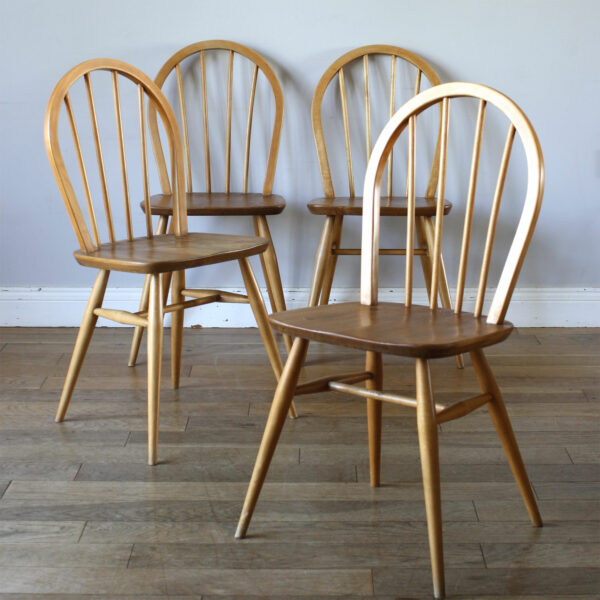 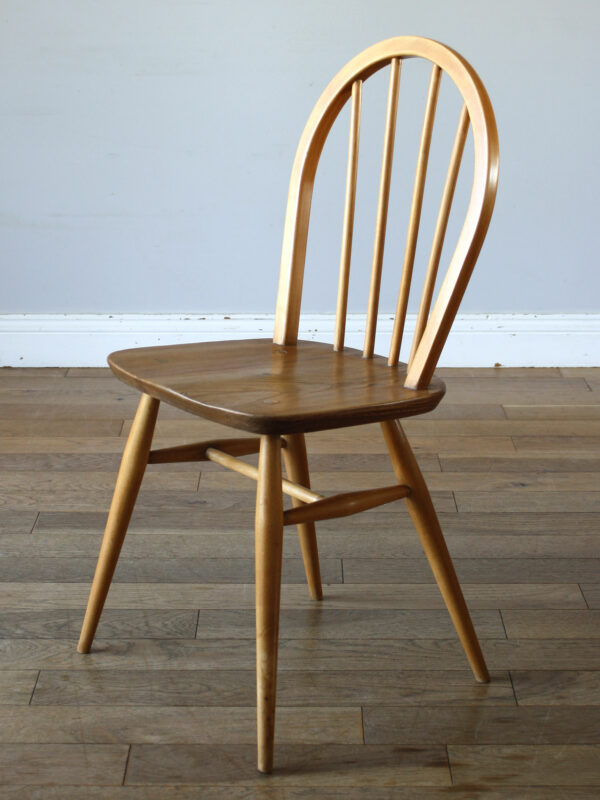 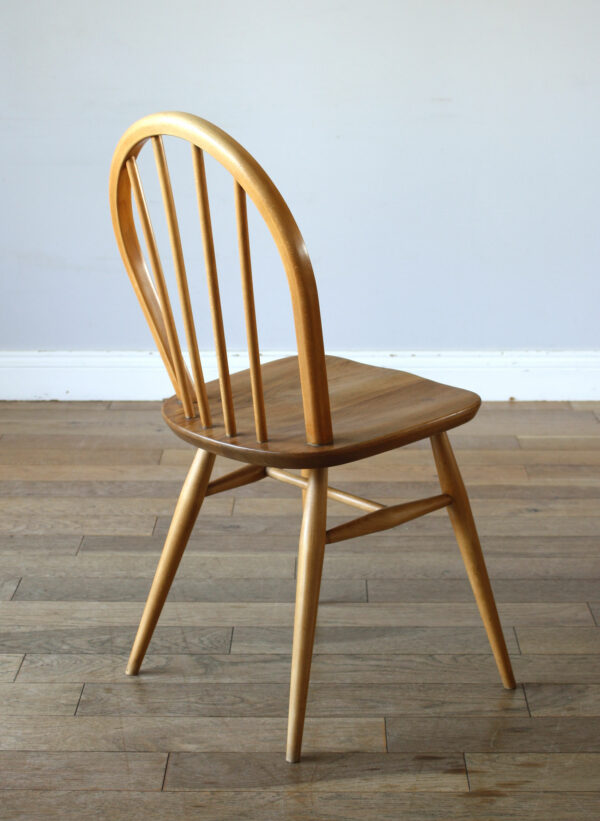 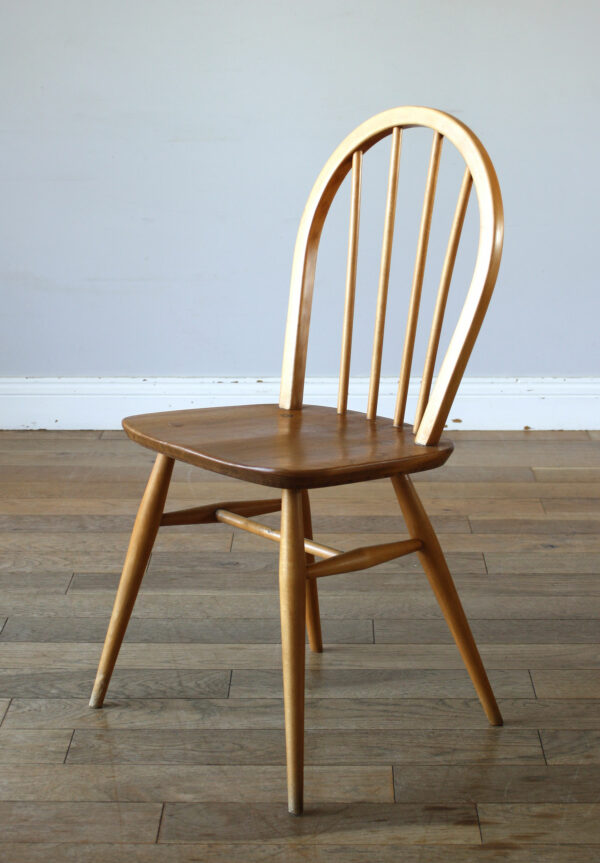 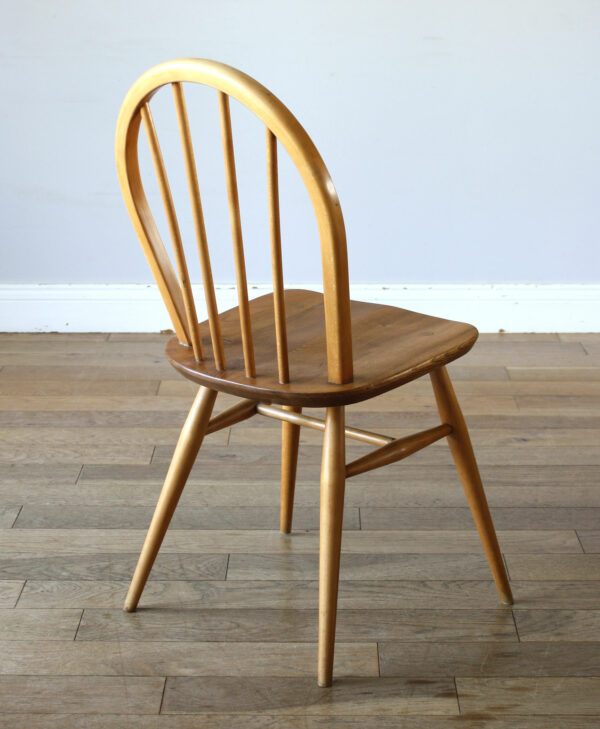 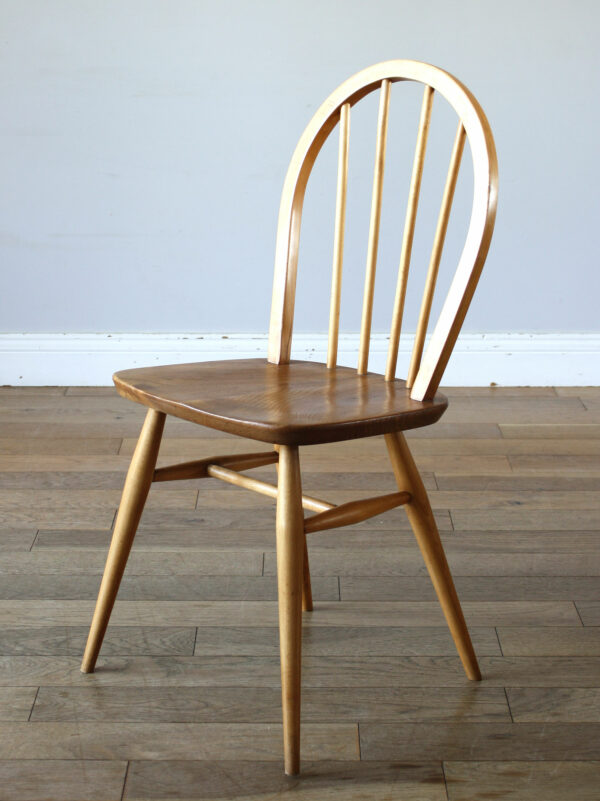 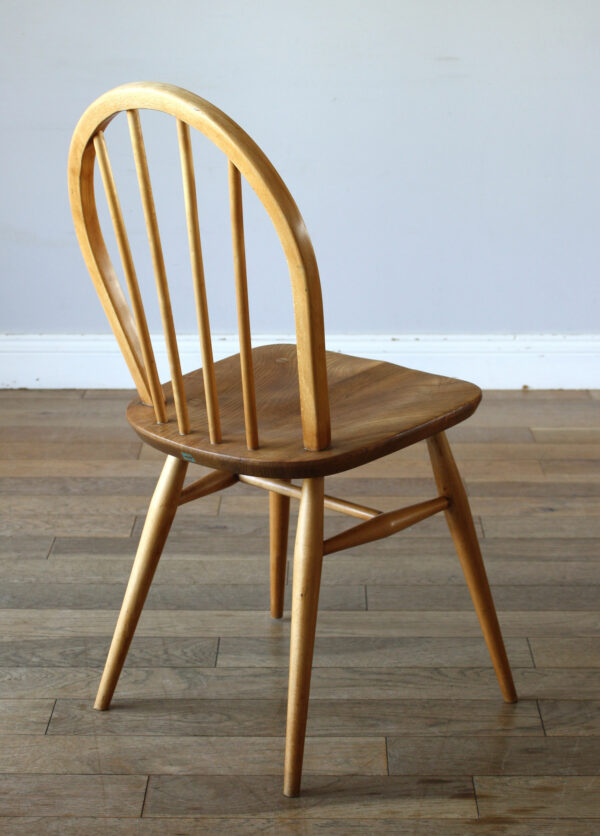 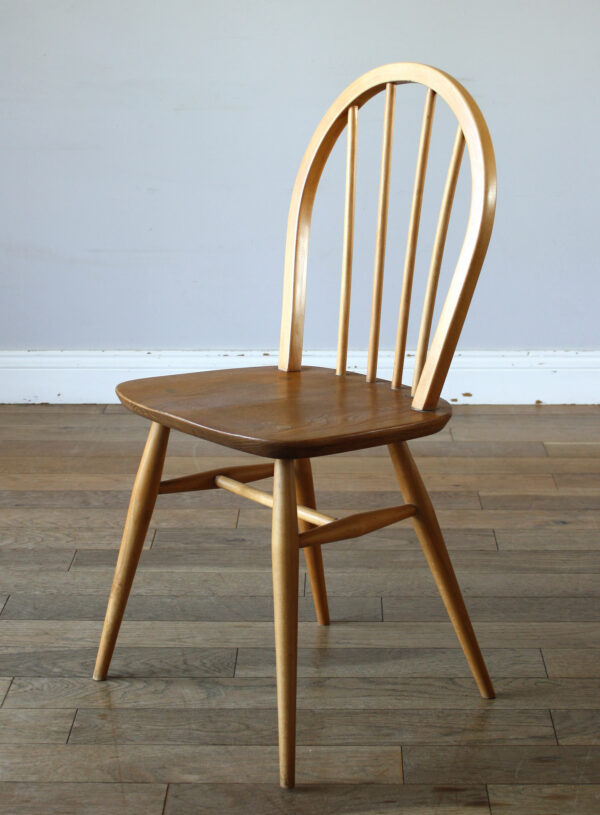 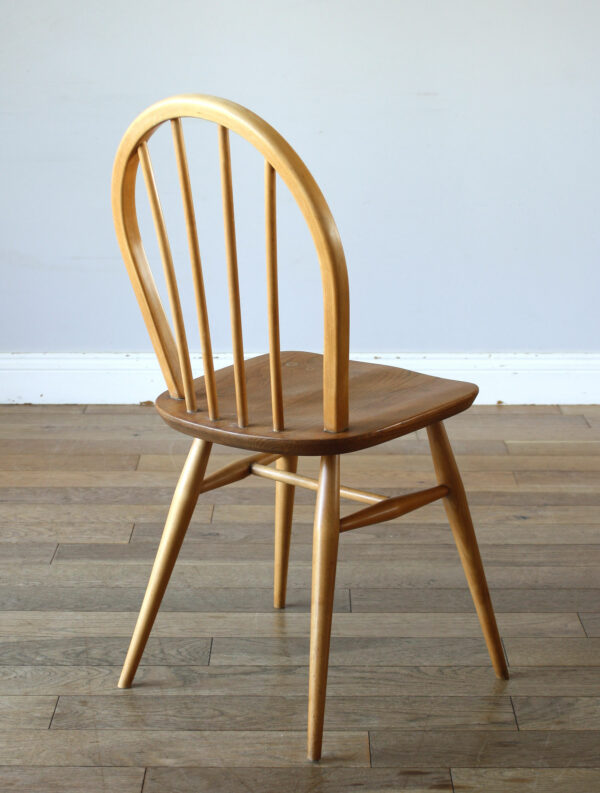 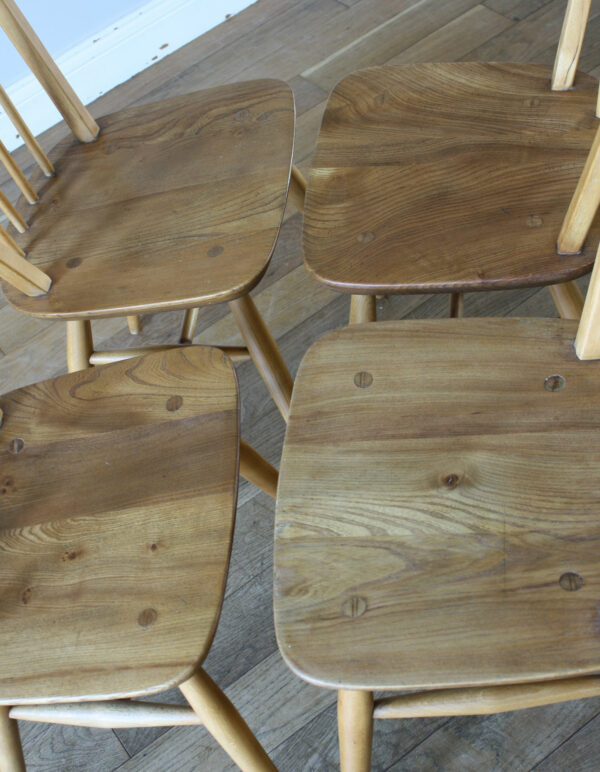 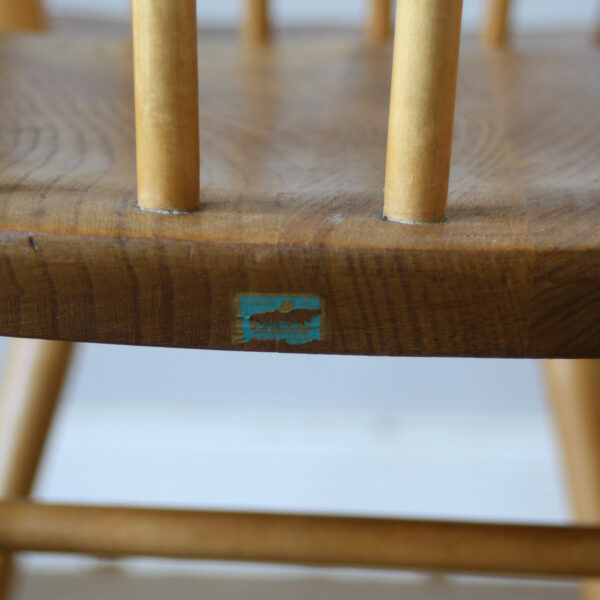 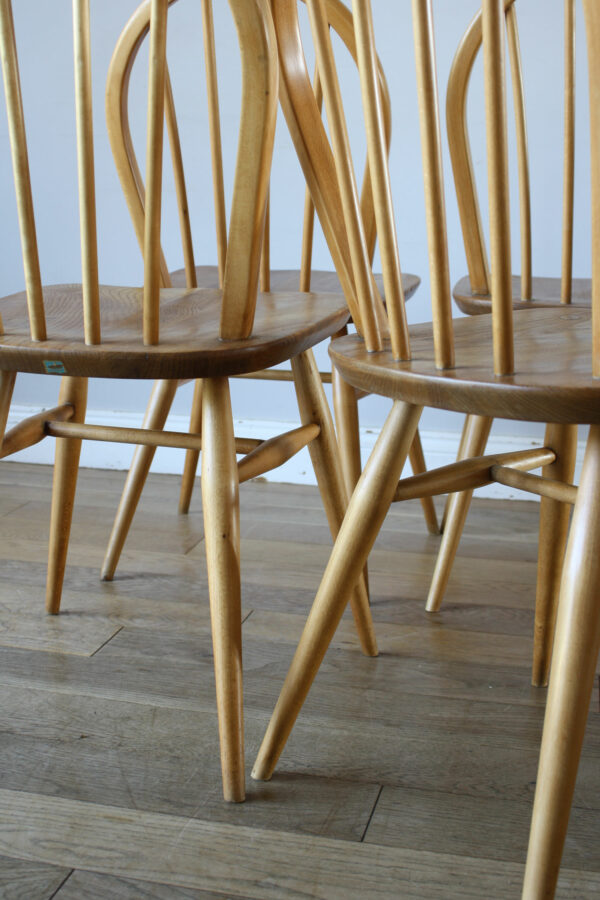 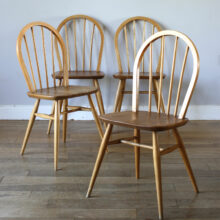 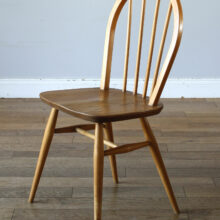 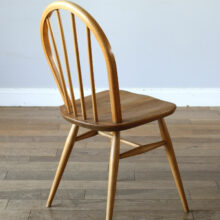 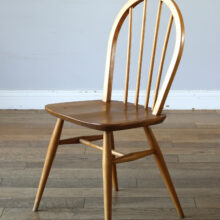 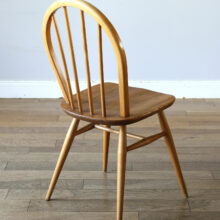 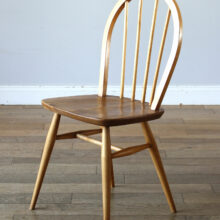 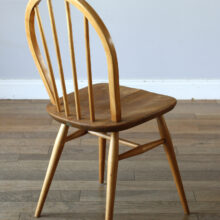 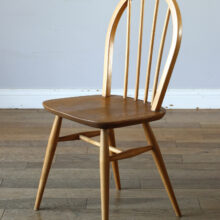 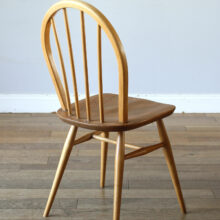 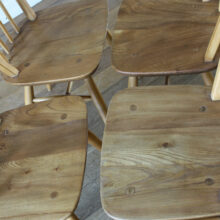 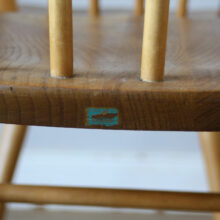 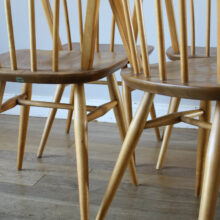 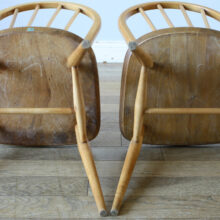 An early set of four Model 400 Windsor Chairs in their original unrestored finish. Featuring four spindles held in place with Ercol’s trademark curved-wood loop, they’re a combination of solid beech and elm blond woods. They were designed as much for dining comfort as they were good looks. This particular set can be precisely dated as one of them retains its original ‘This is an Ercol Production’ label, which was predominately used in the late 1950s, they also have the BS 1960 Kite Mark, so they would have been produced in the very early 1960’s. They are beautiful crafted chairs designed for everyday use and this can be seen in the finish and patina of these 60 year old chairs. With neat proportions compared to chunky, modern dining chairs, these chairs work so well in smaller kitchens or family rooms where space is a premium. They will look as at home in a traditional country cottage as they would in a mid-century-inspired interior, such is their broad appeal and timeless design.

These are original vintage pieces that are ‘sold as seen’. They are in very good, used condition. These chairs have been carefully cleaned, lightly sanded in places to remove some marks, and then waxed and polished with care taken to ensure the original finish is retained where possible. They have been well used chairs for over 60 years and as such there are signs of wear such as minor scratches, scuffs and blemishes to the wood. All four chairs are superbly crafted, solid and stable with no wobbles. One of the chairs carries the original marker’s sticker on the back of the seat.